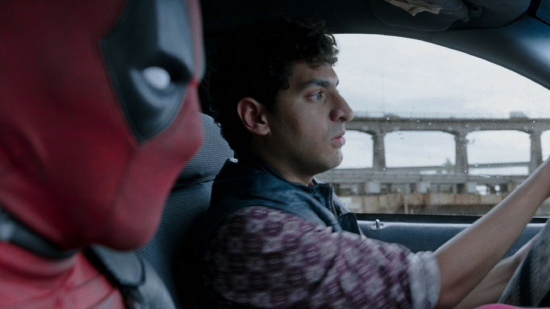 Swades track in the superhero sequel

Come May 18, Deadpool (Ryan Reynolds) will return with his favourite cab driver Dopinder (Karan soni) for a fresh set of die-laughing adventures in Deadpool 2. Much has been made of the camaraderie between the two unlikely buddies. And what is a cab ride without a good track playing in the background?

The 2016 original had us straining to hear Mera Joota Hai Japani (Shree 420) and a Punjabi song, but cut to the film this year and you can expect to hear a more recent song playing over their banter.

This time, the music is loud enough to irk Cable (Josh Brolin), who wants the music turned off and Deadpool tells him to stop being racist. The song in question is from a Shah Rukh Khan film and we’re quite titled because of how apt the placement is yet again.

The song is from a film called Swades, which also forms part of a road trip. The song? Yun Hi Chala Chal Rahi. Yes, the AR Rahman composition, with lyrics by Javed Akhtar and sung by Udit Narayan, Kailash Kher and Hariharan.

The choice of background songs for these scenes is rather apt. If you remember correctly, the first film had far more scenes in said cab.

One of those scenes had DP alone with Dopinder where they’re discussing about the latter’s situation with his “love rival” and how he hasn’t been able to muster courage to tell his girl that he loves her.

Another had some random Punjabi track playing over a heated discussion between DP and Dope talking about him actually acting on the merc-with-a-mouth’s advice.

This time around, too, the song choice in the film, a Fox Star India release, is a rather apt one. If you remember the original track had visuals where SRK is driving around in an RV and picks up an unlikely companion in Makarand Deshpande’s character and they get along by the end of the song. Ditto with Domino, Cable, Deadpool and Dopinder in the cab.

Let us know how you liked the only Indian track playing in Deadpool 2.