1. This Party Is Over Now:
Yo Yo Honey Singh is king on this bopping banger which urges you to sober up. The antithesis of his own Party All Night or Chaar Botal Vodka, lyrically.

2. Sawarne Lage:
Jubin Nautiyal’s forte is love songs and this song is testament to what can be achieved if you marry a beautiful melody to a sundowner-vibe wala electronic track (composed and penned by Tanishk Bagchi), that’s not unlike something put out by the likes of Kygo or Marshmello.

3. Kamariya:
Darshan Raval brings you to the dance floor for this Gujarati-Hindi banger and doesn’t let you stop. You can’t help but shake to this Navratri track that gets stuck in your head from the moment the music starts. George Lijo and DJ Chetas have composed the track while Kumaar has written the lyrics.

4. Door Na Ja:
Truth be told, the highpoint for us had to be the stellar violin-playing and Sonu Nigam’s rendition. The Sharib-Toshi track is melodious but rather forgettable. Also, rather simplistic lyrics by Kalim Shaikh.

5. Sanedo:
Raja Hasan accompanies Darshan Raval on the second garba (or Gujarati folk, if you will) track. This one’s a Tanishk-Vayu effort with Vayu writing the lyrics. It’s a modern take on the popular traditional song.

7. Ghar Ke Hai Na Ghat Ke:
A swing-style old-world song, this one comes courtesy Sameer Uddin and Abhishek Nainwal with the duo pitching in for lyricist duty. Bappi Lahiri’s still got it and there’s a bit of disco going for this track. Feels gimmicky, though.

VERDICT:
Nicely complements the coming-of-age of its principal characters. Massy enough to appeal to a wide audience. Has at least four solid hits. Not without its weak moments, though. 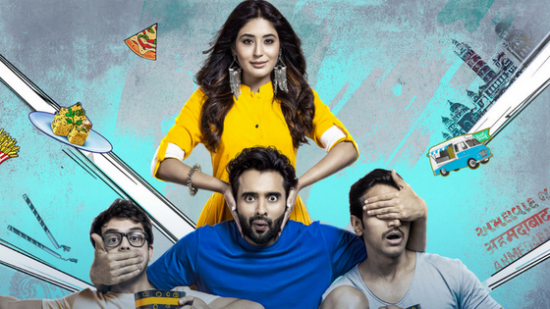