An aca-WOW for this Marathi effort! 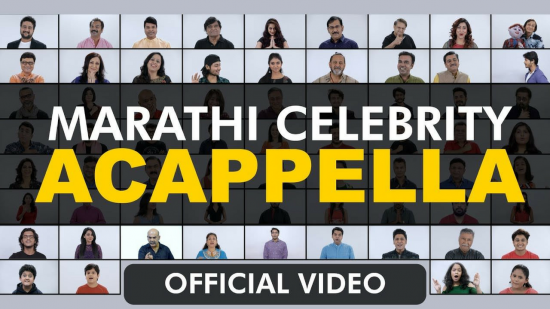 What this ‘Marathi Celebrity Acappella’ video means for this genre of music.

You might not know this, but the Marathi film community is pretty close-knit. That becomes even more apparent when you chance upon a video titled ‘Marathi Celebrity Acappella’. It’s a who’s who lineup of artists from across the entertainment spectrum coming together to sing a mashup of popular songs that define the best in them. In fact, the video was released as a tribute to India’s first full-length feature film Raja Harishchandra on May 3.

The voices of singers like Shankar Mahadevan (vocals only), Avadhoot Gupte, Hariharan A, Sonu Nigam, Sudesh Bhosale, Swapnil Bandodkar and Vaishali Samant are immediately recognisable. There are a few child artists and news reporters who feature as well.

Of the a capella artists, the choir is formed of Abhishek Shelar, Aparna Nimkar, Chaitanya Shinde, Jitesh Gire, Prajakta Mankar and Swaroopa Joshi. Nicholas Mohite has done the beatboxing with additional sound effects by Roshan Jadhav and rap by Tanmay Brid.

Also, you know you’re headed in the right direction when someone of the stature of Amitabh Bachchan wishes you (in this case, producer Ameya Vinod Khopkar). Considering he has done an a capella version of the classic Bollywood song ‘Sar Jo Tera Chakraye’ an ad for Navratna hair oil, a brand he endorses.

He tweeted the link to the song (see his tweet T2793), captioning it thus: “A first by Marathi film… an Acapella rendition made by AVK Entertainment, and Ameya Khopkar best wishes to you.” Except… as we humbly submit, the description of the video clearly states, “This video is produced only for promotional & entertainment values of Marathi culture and music to the industry in last six decades….” It won’t appear in a Marathi film.

Now to what we think about the actual video. It’s a superb start. A capella as a genre has always been languishing slightly shy of the mainstream. Despite Amitabh Bachchan (in the hair oil ad), Ranbir Kapoor (Jagga Jasoos Official Teaser Trailer) and the existence of RaagaTrippin’, Voctronica and its likes keeping the tradition alive, we feel for it to actually take off as a genre, it has to get more local, more desi-fied.

So yes, we need more Marathi a capella tracks to be released. And in other languages, too!