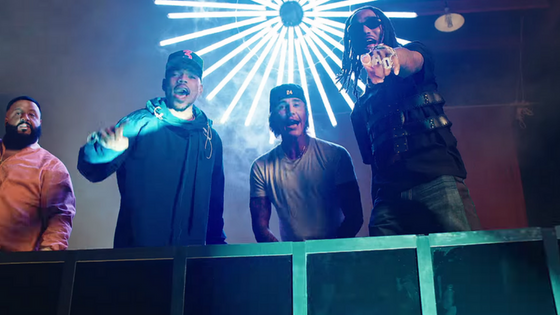 While ‘I’m the One’ was truly the song of the summer, ‘No Brainer’ lives up to its name.

Perhaps the song lost its touch making it family-friendly. But, we don’t understand how smoking and alcohol, and a kid, together make a family-friendly song. Although, when it comes to Khaled, everything is possible and justified.

We can’t help but compare both the songs, where Lil Wayne has been thrown out of this time. While ‘I’m the One’ had an infectious beat and radiating energy, ‘No Brainer’ sounds more like a half-hearted attempt to recreate last year’s hit.

We are trying to find what went wrong this time. Budget problems? With Khaled burning excessive cash (refer: Dinero music video), perhaps that happened. Even Chance The Rapper sounds tired of this crap. As if he just wants out of this. Quavo is almost invisible, or people are selectively cutting him out of this. Maybe it was the sole expectation that any song with Justin Bieber dancing (or just making a cameo, even) will eventually become a hit.

One of the few moments that make us want to forgive this collaboration includes such when the camera focuses on DJ Khaled’s adorable young son Asahd, perched happily on Bieber’s lap. We can’t think of another moment where we actually liked the song.

But, for those who love drama, here’s something we think. If we pay attention to the lyrics, there was one line which stuck out the most, “Him or me? Be for real, baby, it’s a no-brainer.” Sounds like something he would say to Hailey, his fiancee.

Justin’s Canadian rival and Hailey’s Met Gala date Shawn Mendes don’t have the best history. Their cold war has been brewing for quite some time. Bieber once asked who Shawn Mendes was. As a silent response to that, when a fan asked Shawn to sing 10 seconds of Justin’s famous song Sorry, Mendes stated that he has never heard of the song before, and mind you, with a smirk.

We even forgive Justin’s washerman hairstyle in the song, all because of this.