bandook#InterviewsRajat Kakar: ‘People need to understand that copyright infringement is as bad as murder’ 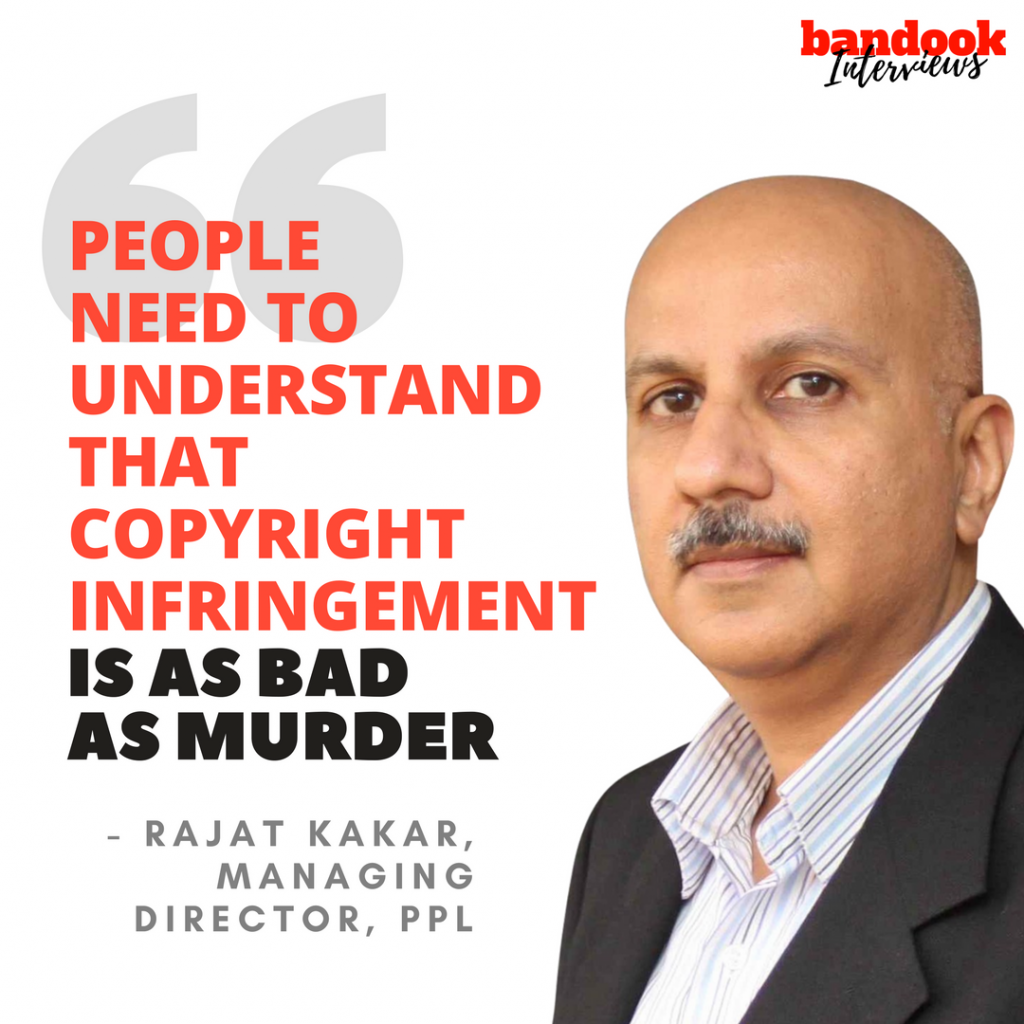 The beginning of the year saw a major development take place. Rajat Kakar, a man everybody in the Indian music industry knows — he has over two decades of experience in the media and entertainment business — was appointed as the Managing Director of Phonographic Performance Limited (PPL) India, with effect from January 1, 2018. The appointment was confirmed by Sridhar Subramaniam, Chairman of the Indian Music Industry.

The PPL has been operating for over 70 years and is a platform for collective licensing for more than 250 Music Labels. His endeavour and ‘eventual vision’ is to work together with all the existing Indian copyright societies and the various copyright owners do achieve common goals

Over the course of a phone conversation, we asked him to hold forth on the state of copyright compliance in the country, his early days at the new workplace and what he hopes to achieve, going forward.Excerpts…

What is the first order of business since taking charge of PPL?

I’m here to make a positive difference to the way we do business. Which means three things: one is, we must engage with all constituents — be it our members or our customers — and hear them out, in terms of what is it that, they’re looking at, so as to simplify the way we do business; to get more people to take a voluntary licence wherever possible. That leads us to the second part, which is about simplifying the processes and the tariffs. The third is to build an organisation which can take both of the above forward and make sure we grow the pie. It’s really about thatIt’s my second week in office, but that’s just really, the direction I want to take the company into, where we work with everybody together to make it a positive (space), where people are likely to respect our copyrights, where they are ready to pay for it voluntarily and share with us whatever issues they have. And then we take those issues on board and try and sort them out as soon as possible to the best of our ability and run this organisation which takes this forward.

What do you think is wrong with the state of copyright compliance in this country? Is more education needed on both sides of the divide, as it were?

There is. To answer the second part of your question first: Education, yes. People need to understand that infringing/stealing copyright is as bad as murder or any other offence, because frankly, you’re taking away somebody’s livelihood away from them. As bad as a theft of a vehicle or of jewellery. I think that recognition needs to come. Also, we need to make it simple to acquire a licence. A lot of it relates to, you know, people don’t understand, DzWhat licence do I need to take?dzPeople, it would seem, are willing to take a licence, but don’t know what to take. And we need to put things on the website, where you put your details, and automatically it comes what licences you’re likely to take. For example, if you want to take a licence online, or if you have further queries, Dzcall up this numberdz. That’s the direction we need to move in.

So, there’s two things: lack of respect and complications in taking a licence.You’ve mentioned in an earlier interview that pricing policies of intellectual property needs to change. What changes are required?

What I mentioned, had to do with tariffs. Like I mentioned, they need to be simplified. At the moment, I think it’s very complicated — how many hours, how many stars, how many superstars. We need to simplify the attributes involved in a music event and the licenses required. How soon before we see a turnaround in the health of revenues of the Indian music industry, vis-a-vis PPL?

I think we’re getting there. Of course, I just joined. I’m looking at the next three to six months wherein we set up the proper systems and processes and it runs. Finally, there’s technology and various AI (Artificial Intelligence). It can only get better. Better distribution, so that everyone’s happy with the use of technology to enable us instead of manual intervention.

If you could describe your journey in the music business in one line/word?

I would say that my journey can actually be described in one word and that’s ‘change’. When I joined Sony Music India, we brought about a huge change in business practices, at Universal Music India, I got them to embrace the digital era, which was just about starting at that time — we were moving from physical to digital — and we embraced digital very well. Then, I moved on to Sony DADC India, where we set up the best for packaged media and entertainment throughout the country. Here, too, at PPL, I want to make sure, there’s change for good. Change for betterment is really what it’s all about. And it requires swimming against the tide. And that’s what I enjoy and that’s what I’d like — swimming against the tide and actually making a difference