‘Behka’ emerged out of a happy coincidence 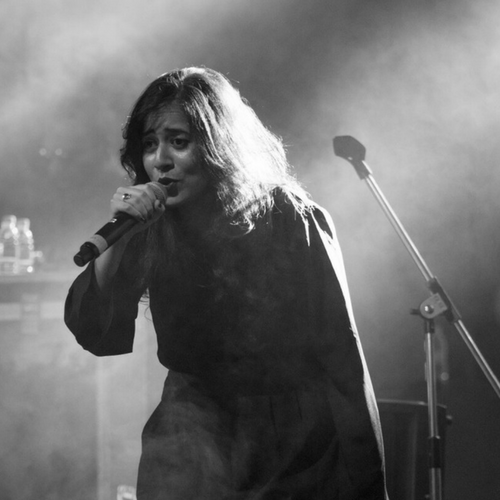 Vibha Saraf on how the track with Nucleya came to be

Singer-songwriter Vibha Saraf may have come to the fore with Loy’s Dilbaro (Raazi) and Nucleya’s Behka (High Jack) in quick succession, but one tends to forget that the Kashmiri artist has at least six other films to her name in Bollywood, before this.

We caught up with Vibha over a phone conversation and she tells us how her story with Nucleya (on High Jack’s ‘Behka’) “began as a coincidence of sorts”.

She says, “I met him at the airport as I was coming back from a gig with Loy Mendonca and Ehsaan Noorani. Initially, we weren’t supposed to have a conversation. I mean, I wasn’t much inclined towards that genre of music. I knew he was a big name but i had heard Laung Da Vacha and that was it…. So anyway, there were these two boys travelling back with me (they’re very good singers) and they wanted to meet him. So I was like, ‘That’s simple, just go up to him and talk to him.’ But they were shy. So I just offered to help them out, I talked to him, They exchanged phone numbers and I was like… maybe I should take his number too, or it’ll seem a little… awkward. So I did. I sent him my work. Of the three of us, he apparently got back to me.”

Nucleya (real name: Udyan Sagar) asked her if she wrote and enquired if she had published any songs and asked her to give it a shot. “He sent me the instrumental piece of Behka and I randomly sang on top of it, which are the lines you hear on the final track. He actually said ‘This is great’. I was shocked because I’d sent him voice notes and wondered what he’d think of me. But I did anyway. And that’s almost Behka for you. He asked me to dub it from Mumbai, but i insisted we record it together in Goa (where he lives). He is one of the most helpful music producers I have ever worked with, always pushing boundaries. In fact, I never thought the melody and the beats would merge so seamlessly. I went on to do another single called ‘Dhoop’ for him, which incidentally released before ‘Behka’ did. Dhoop released in October and Behka released last month.”

She says she finds it funny that history sorta repeated itself when High Jack (which was to release on April 20, but instead finds itself aligned with Raazi, which releases May 11.

Either way, coincidence or not, it sure has ended happily for her. Well, hope both High Jack and Raazi do well at the box-office.