‘Chalte Chalte’ takes you for a familiar ride 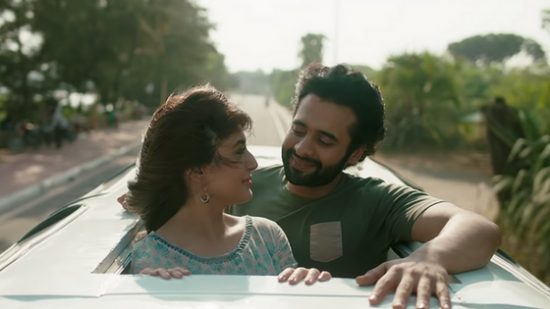 Kritika Kamra and Jackky Bhagnani in Chalte Chalte from Mitron

In what’s become the norm rather than the exception, we have yet another re-creation, courtesy ‘Remake Raja’ Tanishk Bagchi. Chalte Chalte is the third single off the Mitron OST and has been sung by Atif Aslam.

The song, in case you haven’t a clue in the matter, originally featured in 1972’s Pakeezah. That song, featured lyrics by the legendary Kaifi Azmi and music by Ghulam Mohammed and was sung by Lata Mangeshkar.

Let’s start with the video. By now, you know there’s a food-truck involved and that lead pair Jackky Bhagnani and Kritika Kamra fall for each other over the course of the film on what looks like a road-trip, accompanied by Jackky’s friends. That journey made by the ‘musafir‘ to their ‘manzil‘ is charted in this video.

Tanishk has penned “additional lyrics” for the track and they feel a bit rough around the edges, but get the job done. The music is mellow and the soundscape is contemporary. You’ve got Atif Aslam singing and that’s now become a thing. But what is he doing here that he hasn’t already done in the past? He sings as expected and there’s really nothing new or fresh he brings to the table.

And one can appreciate the effort Tanishk takes in owning his re-creations, going as far as changing as much as of the lyrics and the vibe of the song as much as possible, retaining only the core hook. But the thing about remakes/re-creations is this. You’re always going to compare it with the original. Yes, the mood and the situation for that film was quite different from this one.

The more important point is the intention behind the track. Does it serve its purpose in the film? By all accounts, this one seems to. And that seems to be a progression from the time Bollywood used to just change the pitch and/or tempo of a track, add a few elements in and call it a re-creation.

Times have changed. And as an audience, we seem to like being reminded of forgotten and/or all-time hits. On our own terms or by the tastemakers we’ve come to love.

Our point every time we listen to a song remake (pretty often, going by the number of them Bollywood churns out) is this, too much of anything is never good. Yes, we do like our bhule-bisre geet regurgitated or repackaged every now and then, but try having the same thing, day in and day out and you’ll know why we, as an audience, need to change our listening habits.