Deadpool is a singing unicorn in Korea 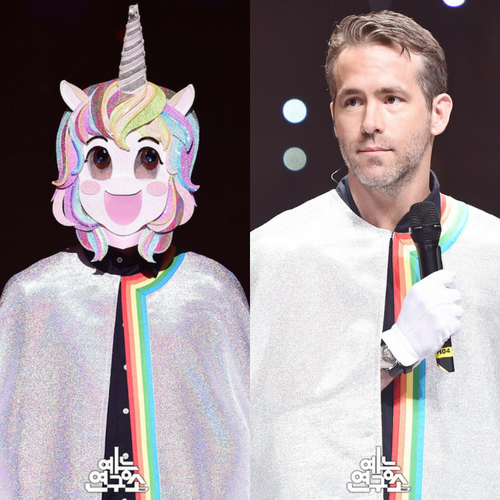 Ryan Reynolds wows South Korea with a rendition of Tomorrow from Annie.

Has Céline Dion seen the video yet?

Who needs a 11 when you want a 5? Celine Dion might have told Deadpool aka Ryan Reynolds off at the end of the video for the recently released ‘Ashes’, for asking her to scale it down for the film, but Ryan Reynolds went on to a Korean game show called King Of Mask Singer 미스터리 음악쇼 복면가왕 and blew everyone’s minds with his rendition of ‘Tomorrow’ from the film, Annie.

KOMS is a competition between eight celebrities who wear a mask (completely hiding their faces) while singing. The program focuses on the stars’ talents as people try to guess who’s singing.

Ryan crashed the show during his promotions for Deadpool 2 on May 13 and won himself a bunch of new fans, wearing a unicorn mask. Needless to say, everybody collectively lost their minds during the reveal.

Following the reveal, he said, “Hello everybody. I’m so sorry about that song.”

It was revealed that he was visiting Korea for two days and took time out to secretly appear on the program.

He added, “Thank you guys for having me. This was such a thrill. This was an unbelievable honour for me. You guys pushed me to my own limits, and I thank you for that.”

In a later interview, he shared that it was his first time singing on stage in front of people and added, “I’m in the top five worst singers in the universe.”

We don’t agree with him, of course. But this game show sounds like something we’d like to see replicated in India, no?

Meanwhile, Deadpool 2 releases this Friday, May 18, 2018 in theatres across India. Ranveer Singh will voice the title role in the Hindi version.