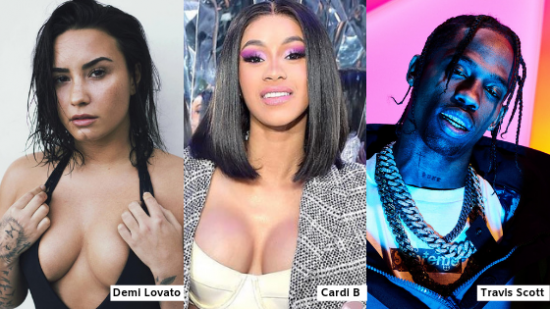 Demi Lovato emerged as the most popular search query on Google in the US in 2018 in the search giant’s top trending searches.

The trending data examines Google searches that experienced a higher spike in traffic when compared to the same time period in 2017.

According to Google’s “Year in Search”, musicians made up a bulk of the most-searched list in the US: Eminem ranked second, Ariana Grande ranked third, Cardi B ranked fifth and Childish Gambino took seventh place on the list rounded up by Queen (buoyed by the release of the Freddie Mercury biopic Bohemian Rhapsody). Globally, Cardi was in second plac, Travis Scott in fourth, Childish Gambino in eight and Nick Jonas in 10th place.

In the global search list are some musicians in the news for all the wrong reasons: Daniel Küblböck disappeared after search parties failed to recover his body after he fell off a cruise ship. 6ix9ine is facing several federal charges and is looking at jail time. Tatsuya Yamaguchi (#7) of the all male J-Pop band Tokio was embroiled in a scandal after he admitted to forcibly kissing a school student against her will. Hitomi Yoshizawa (#9) of Japanese all-girl idol group Morning Musume injured two people in a hit-and-run incident in September while driving under the influence of alcohol and was sentenced to two years in prison.

The full lists of search trends are available HERE.