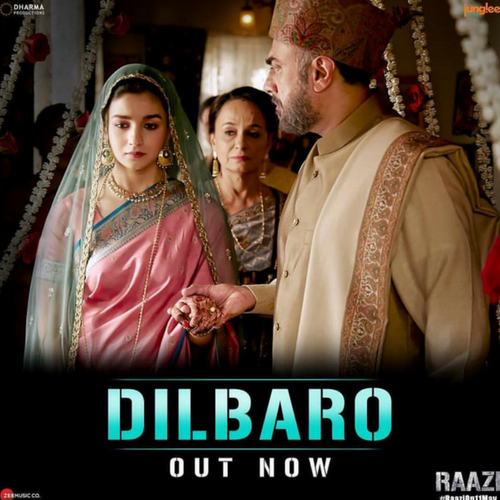 With the release of video of the latest Raazi track today, we reached out to singer Harshdeep Kaur for a short chat.

The one thing that strikes you about the video for Raazi’s ‘Dilbaro’, which quite ostensibly, is a bidaai song, are the almost-absent tears that usually follows a bidaai.

The emotional core is present throughout and the fear of the unknown is palpable throughout — anyone who has watched the trailer will know why by now — but it scares you how difficult it must be for someone to put country over oneself in a way that Sehmat, Alia Bhatt’s character in Raazi, does and get away with it in full public view.

A solitary tear makes an appearance despite the song’s deeply emotional content. The lyrics by Gulzar move you and truth be told, don’t need the visuals to underscore the fact of an imminent separation.

What’s even more brilliant is the timing of the line “dehleez paar kara de” which plays just at the moment Alia and Vicky’s characters cross the border into Pakistan.

We reached out to singer Harshdeep Kaur to talk about the song. We asked her about how she came on board. “Shankar ji (Shankar Mahadevan) called me and asked if I could come to the studio to record a song. He checked my key on the phone. Just by hearing him hum the song on phone I could make out that this tune is going to be something special. I reached the studio and saw director Meghna Gulzar there. I was then told that it’s a song for her upcoming film Raazi and that it’s penned by none other than Gulzar Saab! It’s my second song for him after Heer. As soon as I heard the song I got goosebumps and it made me very emotional at the same time as I’m really close to my father,” she replies.

When we tell her that just a cursory glance, one can tell that it isn’t your average vidaai track, she agrees and adds, “Meghna ji showed me some visuals from the movie and explained the situation to me. The song is not just any vidai song, it has a very deep meaning to it.”

Tell her that there’s the innocent child-woman on the cusp of adulthood vibe to her voice. We asked if some voice modulation was involved. She said, “I haven’t done anything to my voice. I think it’s the beauty and meaning of the song that has brought out the innocence in my voice. The innocence of a daughter. Nothing intentional there.”