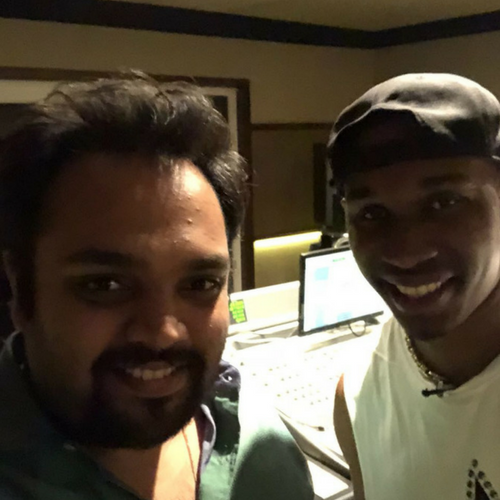 There’s no doubt about Dwayne ‘DJ’ Bravo’s spontaneity on the crease as well as in the studio. And he proved that when he released a victory song for his Indian Premier League (IPL) team, Chennai Super Kings (CSK) earlier today.

What we now know, thanks to Nisschal Zaveri, the producer of the track, that it was recorded last week, way ahead of CSK’s victory over SunRisers Hyderabad in the IPL – Indian Premier League finale.

Nisschal apart from being a singer-songwriter, music producer, multi-instrumentalist, composer, and also the managing director of Tribhovandas Bhimji Zaveri Entertainment (P) Ltd and the owner of ENZY Studios, a Mumbai-based studio (established in 2013) that provides recording and production services.

He told us over a phone conversation about the conceptualisation of the track, how Dwayne came up with the track and how he came to be part of it.

The track has an immediacy to it. Almost like Dwayne knew CSK was going to win…
I can tell you that the track was recorded very last-minute, last week, in fact. He recorded Trip Abhi Baaki Hai at our studio last year and we’ve known Bravo since then. He keeps sending over ideas, song tunes or lyrics that pop into his head. He came up with one of his very spontaneous ideas. He sent this and said, “I wanna sing this song.” So that is how I came on board.

Have you worked with him on any other project?
No, just these two. The other one, I wasn’t directly involved. This time when he came, he called me directly.

What was the basic idea?
It’s a dance number with a hint of the (very recognisable) Jingle Bells melody. It’s all about celebration, dance and fun. Needless to say, had CSK not won, the song would have to be shelved as it would have no meaning otherwise. We weren’t told if We Are The Kings would have a release date.

Excited about the CSK win, then?
We were more excited that the song would get a release.

Think the song will go far?
It will pick up soon enough. The tune, the lyrics et al, all have his stamp.

As a music producer, what was your brief?
My job was to make the song fun, add instrumentation, crowd shouts and other elements.

What can you tell us about the track?
It’s a rhythm-heavy song. We obviously wanted South Indian elements put in. The bagal baccha and the been, which is traditionally played at weddings.

And you would sum up this project, how?
Bravo didn’t want the track to be music-oriented. He wanted the main melody out, the words to hit and basically, the people should enjoy the whole combination.