Every Punjabi Music Video Ever 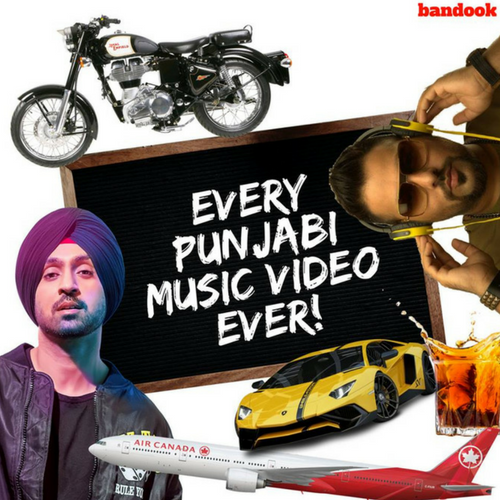 You know you’ve seen one if you see these telltale signs.

What are the chances you’ve seen a Punjabi music video and gone, “Hey, I’ve seen/heard this before in [insert any Punjabi song name here].”

There are exceptions to the norm (think Gurdas Mann, Babbu Maan, Ammy Virk, Hans Raj Hans, Amrinder Gill and Satinder Sartaaj), but most of what we hear or see today in the name of Punjabi pop videos these days, follows one of these templates that’s strictly adhered to…

EAST OR WEST, PUNJAB IS THE BEST
And they’ll build it into the story. Wherever you may roam, home is where the pind is. And folk or urban artist, you know they’re going to rub that point in. Not complaining.

GEDI/BULL’T
Could be a Lamborghini √ i or Porsche or even a Royal Enfield Bullet. And if you’re being fancy, something that bears the markings of something from the Big Boy Toys stable. 2kewl4disworld, v r!

KANEDA/AMREEKA
The world is flat and these are the two countries (apart from sadda Punjab) that exist on the planet. Kaneda is second home and the gori/videsi patola is bound to fall in love at some point with our gabrus. Because hey, Punjabi munde (khetan vich, even more so) rock. And did we tell you how much we love our Gucci, #Armani te Prada?
Not to mention, video can must be shot at exotic location. No compromises will do.

DARD = MARD
What’s with these kudis? They don’t know our munde’s worth. He does so much for her — spends money, fulfils her every demand and what does she do? Breaks his heart. And makes him stare at her picture in wallet all day long. How often do you see that?

BANDOOK
Call it shameless self-promotion, but hasn’t almost every big Punjabi singer displayed one in the vid or included one in their lyrics at some point? We love our guns.

WHISKY/ VODKA PEG
Car-o-bar or otherwise, we’ve got a taste for the good stuff, sing the singers. Daru may be Badnaam, but 3 Peg is one of the most viewed videos on YouTube.

IT’S A RAP!
Just like Pokémon, the idea behind marketing these songs is catching them all (of all ages). A rapper has to be part of the song (almost any song these days) to be able to groove to it and ‘party all night’. Keep blasting it woofer phaad ke, DJ!