FAN REVIEW: Darshan Raval reminds you of your teenage crush in ‘Do Din’

The video for Darshan Raval’s new single Do Din is out and unlike the usual heartbreak melodies (however soothing), this time it’s for a #HappyLove song.

Starring Darshan and Akanksha Sharma (of India’s Next Top Model fame) is a supremely vibrant visualiser directed by Divya Palat. The song begins with Darshan walking in for a movie with his friends and as a fangirl, you’ll go all ‘he-had-me-at-that-smile’ the moment they enter the theatre. But that can’t be all, right?

In comes the hook music and you see him break into dance and your heart melts. Make no mistake, he’s an absolutely fine singer, writer and actor and now, he’s nailed the dancing bit as well. Okay fine, it might not be too graceful, but for someone who’s a first-timer at this, you can’t deny that he’s a smooth mover.

The song released yesterday and the video adds to that happy new-in-love vibe that leaves you all warm inside. The choreography might be deceptively simple and the cinematography quite basic, but the overall experience is a happy one. Darshan’s fangirls are in for a wonderful treat and not surprisingly, will be over the moon to watch their boy happy, smiling, dancing and totally in his element.

What works for the video, really, is that Darshan reminds you of your teenage crush — the cute, slightly goofy, but child-like and innocent guy who also looks like a Greek god here, slaying in a full-black ensemble. Also, don’t miss the trademark SRK (outstretched arms wala) pose!

Akanksha Sharma equally looks cute and bubbly and you’re gonna find yourself cheekily smiling as they do the final dance together and leave for a coffee date, hand-in-hand!

Darshan has composed the song and the lyrics have been penned by Kunaal Verma and this writer feels that the two are a great team. Hope they continue their association. 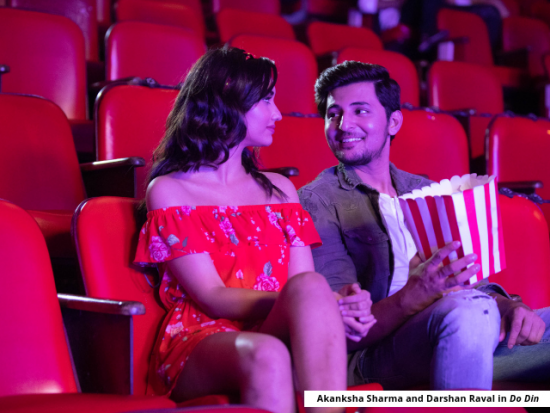