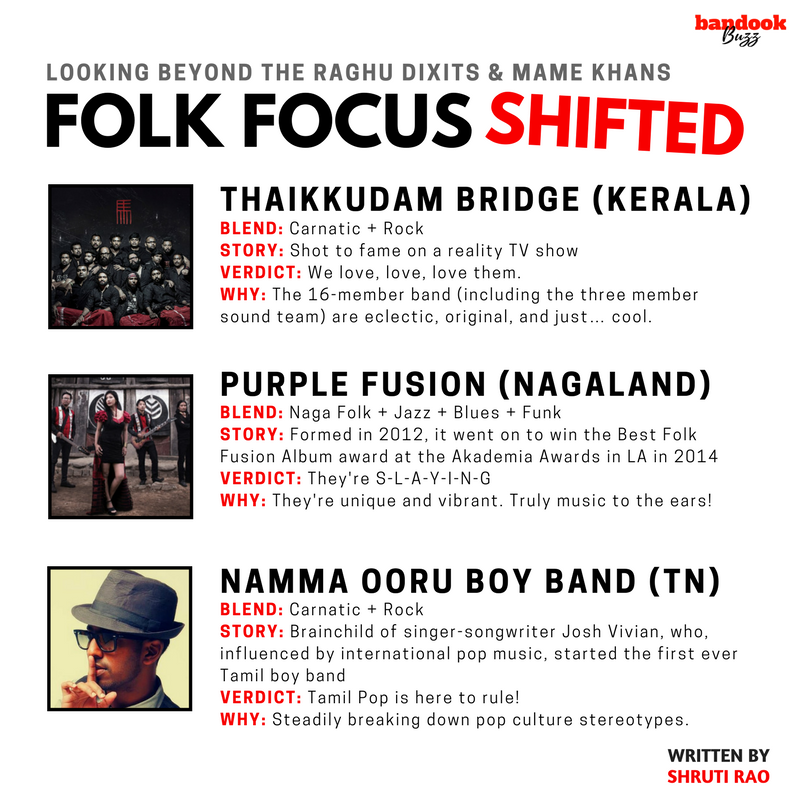 Folk Focus… Shifted
Starting this week, we bring you a selection of artists who mix folk with globally loved genres to create an entirely new sound.

We’re not looking at the biggest names in the folk fusion genre here. To us, it is the artists bubbling just under the surface, on the cusp of greatness, that matter. And they’re there in every state, every nook and corner waiting to be found. We’re shining the spotlight on these three artists for now:

Thaikkudam Bridge
The Kochi-based 16-man folk-meets-metal band is set for the big time. They’ve gone from strength to strength since their inception in 2013. The debut album Navarasam – An ennead came in 2015 and last heard, they were working on new material for the follow-up. Not just that, Lamb of God &Megadeth drummer Chris Adler also features on the new effort.
Music Mojo – Kappa TV and their original composition Fish Rock saw them go viral in a relatively short time with their quirky brand of Carnatic Rock. From here on now and several awards on, sky’s the limit

Purple Fusion
Winner of the Best Folk Fusion album award at the Akademia awards in Los Angeles, California in 2014 for their album ‘Folk Reminiscence, this four-member band from Nagaland is pitching a vibrant version of Naga folk peppered with jazz, blues, and funk. Truly music to the ears!

Namma Ooru Boy Band – NOBB
Out of Tamil Nadu comes a boy band that is the brainchild of music director, singer-songwriter Josh Vivian. His one-man mission is to ‘break down pop culture stereotypes’, by collaborating with different artists and creating music that will make you want to listen to on repeat! Tamil Pop, for the win, y’all!