‘If nobody knows indie music exists, how will they like it?’ – Sharvi Yadav 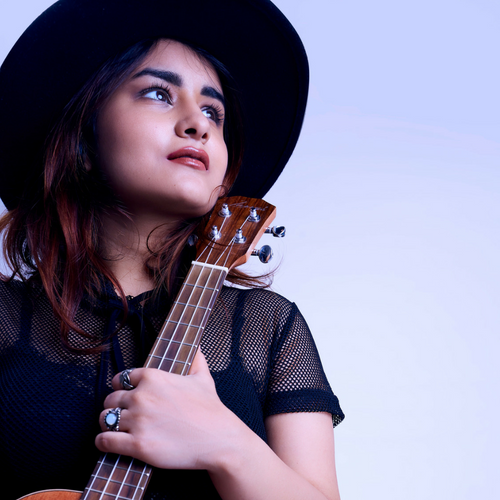 The Stage 2 winner Sharvi Yadav on breaking a closed mindset, crossing over into Bollywood the title song for Veere Di Wedding and bringing change in mindsets of artists

The last time I met Sharvi Yadav was during the early shoot sessions of the second season of The Stage. This was way before she’d go on to win the season. We caught up over a phone conversation recently for her debut song in Bollywood, Veere from Veere Di Wedding, which is blowing up the charts at the moment.
As someone who’s deeply familiar with the indie space and someone who’s made her entry into Bollywood with her unique voice, we asked her how the experience has been since her Stage2 win, what she has been up to, how certain mindsets need to change about the two ‘scenes’ and the composer duo she really wants to work with someday…

How did Veere happen?
I was doing a lot of ads and dubbing for movies. One day I get a call from Vishal Mishra‘s assistant and then I get called in for a session dub. I dub and Vishal really likes it. The idea was, he wanted two new vocalists, who’d never sung in Bollywood before and hence Nikita Ahuja and I were chosen. That is when he told me about the idea that there are four girls in this movie and it’s going to be something like this. He made it sound like a collective thing and it feels pretty real.

There are 4 people onscreen and 6 female voices…
The concept is that everybody sings for everybody. But in the video, ṇo one is actually lip syncing to it. It was to not get one sound but a variety of sounds in the song. You listen to it with a group. It has been released as a party anthem. It blends really well. We are trying to show this energy that has been created and it is felt in the song. We wanted people to connect with it.

How was the recording done?
Everybody dubbed it separately except for me, Nikita and Vishal. I also dubbed with Iulia Vantur.

Highlights of your journey after The Stage 2?
I have had different kinds of incidents happen to me like some were personal, some were eventful, all sorts of stories. I did this Nykaa ad. So this was my first on-screen act. It was more like a music video. Clinton Cerejodid the music and Nirmika wrote the lyrics for it. I never thought I would work with a person like Clinton, he is SO nice. So we shared the stage too at LightHouse Music Festival with Jonita Gandhi. The song got great views, and my face is also on the NYKAA website and I never knew that this could happen because I have never focused on things other than my voice. It felt pretty overwhelming. But I like seeing me on camera. Then other than this, I did a lot of shoots, I did the Hornbill Festival with Kailash Kher, my first trip to North East. I have been doing ads with Garnier India, ŠKODA India, shows. I have been going to colleges and giving speeches about how arts is picking up and about music.

Do you think opportunities exist for female Indie artists?
In Bombay, there are brief opportunities to do everything as a musician. There are so many platforms here too. Indie artists just perform gigs and stuff but they don’t have bigger platforms. Why can’t Indie music go into Bollywood? The people who are aware that it exists are actually going for it. It is happening and there is brilliant content. People from the Indie aspect coming out to this world is important and so is making people listen to their songs. If no one knows it exists, how will they like it? I think that mindset needs to be broken. If you want to make a change, then you have to be the change. I want to be the change. This is the start, let’s see where it goes. I have so many projects coming up, working on my own content, mixes, so it’ll be super fun!

How important is social media in an artist’s life?
I think people need to realise that the world is changing and that holding on to the old world doesn’t really make sense. Change is the only constant. Everything has become digital now. People are shifting from TV to Netflix, Amazon Prime Video India and all these apps. Everything is coming on social media and I think it is a great opportunity. We should be grateful for being in an era where we can act without being signed to a label. We can put out our work and make people fall in love with us. It is a blessing to have this.

Do you see yourself acting if you get the opportunity?
I don’t mind. I got a few calls from some agencies to act but I don’t really know how to be somebody else except for me; that artist thing takes in. I have to be me. I have been carrying this slogan with me everywhere and that has really helped me reach where I am right now. That is why I think acting will be a little dicey for me, but I would love to. I mean, why not?

Who would you sing Veere for? In real life.
I have two gangs – my Noida gang and my Bombay gang. They help me out with so much, they are my best friends, my roommates basically. We go out all day, and when the song released, we listened to it together in the house and celebrated.

Any artist you are looking forward to working with?
I really want to work with Vishal & Shekhar. I connect to Vishal’s music and love him with all my heart. They are brilliant, both of them. Every artist has a sound which dies in a time span of few years. They change their music according to the world and it is loved. That is beautiful. I want to get more inspiration from them and work with them.

You met Sonam Kapoor last year. At this time did you realise that you would be working on her film?
Nothing. I had no idea. I had met her and she was the brand ambassador for Cuddles Foundation and I didn’t know that. It was a happy coincidence. She is a style icon and her performance has been incredible. The way she carries herself, she does so much charity work, she is a rare person who does that. It was a happy coincidence.

Any new project we should be looking out for?
Another movie of mine is coming out but I cannot say the name.