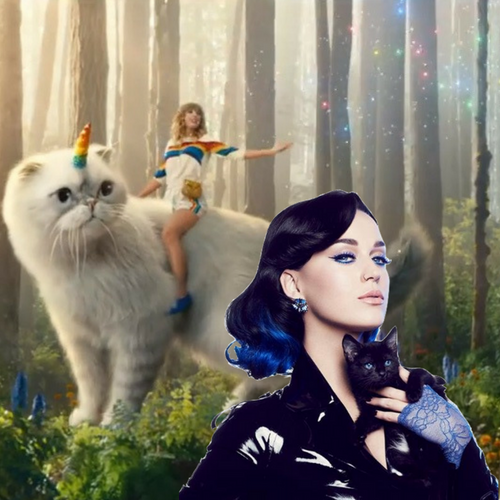 Pretty sure Swifties won’t agree, though

Taylor Swift drops a weird new video. And it’s not what you’re thinking… It’s not the visuals for a new music video but Taylor doing television commercials with her pets. Which, in case you didn’t know, is nothing new.

In fact, she’s all about the cats in at least two other TVCs in the past. Remember the one where she played a crazy cat lady in a Diet Coke ad, or that one time where she troubled her cat Olivia Benson for an AT&T shoot?

In fact, she times these ads to a release of a new single. This time, she does it ahead of her ‘reputation’ tour. Her latest ad sees her sell streaming service DIRECTV and has her riding Olivia in a ‘caticorn’ avatar (cat+unicorn, from the looks of it) while sprinkling glittery fairy dust, while the spokesperson for the service rides pillion on Olivia’s tail.
But here’s a thought. Could TayTay’s bete noire Katy Perry done it better? Here’s what we thought…

RAINBOW RIDER
Katy and her technicolor wigs flying in the wind are so much more relatable. But yeah, Tay, go bother Olivia again!

YOU FELINE IT?
Taylor loves her cats Meredith and Olivia to bits. Is this video an extension of that? Or is this a subtle dig at Katy Perry’s fan army, the KatyCats?

HOWL VS ROAR
That edge-of-cliff cat howl would sound so much better if it were a ‘Roar’, no?

JUNGLE JAM
This is more ‘Roar’ than anything Swift could’ve conjured.

MAGICAL MAIDEN
That fairy dust in the ad reminds us of one line from KP’s Dark Horse: “So you wanna play with magic?” Uh… duh!