Made In India will be way bigger than Lahore is 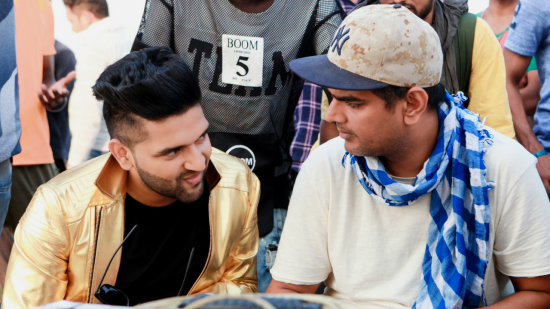 DirectorGifty on his upcoming music video with Guru Randhawa

A self-taught video director who’s worked with the who’s who of the industry, DirectorGifty is a name to be reckoned with when it comes to making music videos. He’s the go-to guy for some of the best-known videos in the business. He’s worked with everyone from BADSHAH (DJ Waley Babu) to Yo! Yo! Honey Singh (Desi Kalakaar, Party With The Bhootnath and Guru Randhawa (Lahore and now, Made In India). And there’s a good reason why. He brings a certain panache to Punjabi pop music videos and has, of late, brought his craft to Bollywood, as well, working with the likes of Amitabh Bachchan.
Here are excerpts of the chat we had with Gifty about Guru’s Made In India video…

How did you go from being Chetan Parwana to Directorgifty?
Gifty is a name I was known since my birth. When I went to school, my parents kept it Chetan. But I liked Director Gifty, with space in between. But since it looks imbalanced visually (gifty has only five letters while Director is eight words) so I opted for DirectorGifty.

And DG for short?
Team DG is actually my team and when clients cannot afford what the DirectorGifty brand offers, we offer a less-costly option called TeamDG.

So, an A&R initiative like Pritam has for #Jam8 or Sachin Jigar have White Noise?
Yes.

Tell us 5 things we need to know about Made In India?
It’s as good as Lahore. Guru has composed and penned the lyrics along with Veemusic. Secondly, I’ve shot in Europe for the first time at Duomo Di Milano and Lecco City. These places have historical value and are quite different from what you see in the Americas. We shot for two days.
We had a hectic schedule. The distance between Milan and Lecco is around two and a half hours. All the shots were scattered at different places and we shot on Sunday and Monday. We had planned to go to a church at 7 am and start shooting without much crowd, but surprisingly, there was a lot of crowds. We had to move people and it was difficult. Lecco City, which gave us shooting permits, have rather nice and helpful citizens. Guru stars opposite Elnaaz Norouzi. She has acted in Punjabi films too.

You have a winning record with Guru. Do you think MII will beat Lahore’s record?
Definitely. Firstly, the audio is amazing. This song is way better than Lahore in terms of music and the video. Lahore’s video was very good, but in this video, there are more things to see and more things to enjoy.

What’s the idea behind shooting videos abroad?
It always depends on the concept, where our story takes us. Most of the time, most videos are made in abroad because the audience likes to see something different. Many people haven’t been out of India. We try to show people good locations so that sitting at home, they can enjoy the video. So that when they go to that location, they remember this song and reminisce it. I also try to put VFX in my videos to attract the kids of the Indian audience. I hope these things become a huge hit in India just like in Hollywood. They have a lesser crew than us! It’s not like we can’t do it, we have more capability and explore new things. We just need to implement it in due time.

Tell us something we don’t know about Guru Randhawa?
Guru is very focused on his lyrics and composition. When the shoot ended, we decided to go out to chill out. We were going to Milan and this guy, he composed and wrote three songs in that time! That is just because of focus and practice. He can make almost anything. Guru’s songs are so sweet, like no one else. He is a great guy.

There’s much talk about Guru’s new look in the video…
It’s more of an image change. He usually plays rich characters. In this, the concept is different. He plays a taxi driver for the first time. And so, he will look like a normal guy who gets impressed by a girl and wants to date her.

Any upcoming projects?
I have a song with Mika and Milind Gaba coming up. It’s called Kalesh. I hope it gains in popularity. The guys will love it.