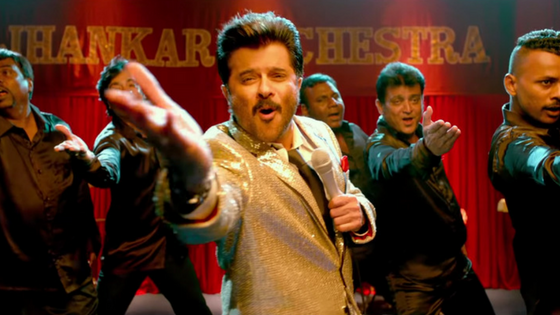 A smart strategy to sell an old song is to remake it and post it on an occasion. And with Mohammed Rafi’s 38th death anniversary on Tuesday, what better than to recreate his famous song? Doing exactly that, actor Anil Kapoor unveiled the recreated version of the iconic song ‘Badan pe sitare’.

The original song, picturised on actress Vyjayanthimala and late actor Shammi Kapoor, featured in the 1969 film Prince. Badan Pe Sitare was originally composed by Shankar-Jaikishan and sung by Mohammed Rafi. This revamped version has been composed by Amit Trivedi and sung by Sonu Nigam and finds its place in Anil Kapoor, Aishwarya Rai Bachchan & Rajkummar Rao-starrer ‘Fanney Khan’.

This song is picturised on Anil Kapoor, who is called Fanney Khan (his name is also added in the reworked lyrics by Hasrat Jaipuri). Anil Kapoor is dressed in a jazzy golden jacket, that is similar to Shami Kapoor’s and looking every bit of a star as he performs Badan Pe Sitare at a local music competition.

Surprisingly, in an interview with IANS, Sonu revealed that it wasn’t for Anil Kapoor, he would not have tampered with a song by his ‘guru’. “I basically was avoiding doing it because I don’t like to tamper with the original songs anymore. I’ve done enough of versions in my past. And it’s Rafi sahab’s song. Who wants to mess with it? He is my guru, he is my musical father. But Anil Kapoorji insisted and he requested me to do it. He said he was playing an ardent follower of Rafi sahab in the film, and that’s why he wanted me to give him my voice.”

This song from Fanney Khan is arguably one of the best-remixed version of an iconic song in the recent years. The trend of recreating old popular songs has taken a toll in the music industry, but none seem to have had us mesmerised by it. Sonu Nigam, who used to do Mohammed Ji’s covers before starting to sing original songs, was also known as Mohammed Rafi Jr. has done complete justice to this version. This might be a nostalgic trip for him, seeing how he has come a long way.

Perhaps its Anil’s charm, or Sonu Nigam’s melodious voice, but the reworked version of this classic is absolutely heartwarming and delightful.