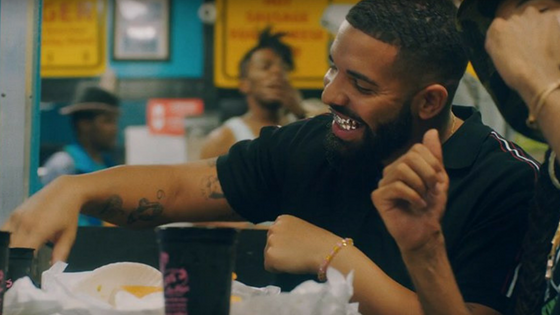 Drake in the IN MY FEELINGS video

Drake’s got you covered. For the next couple of weekends at least. The artist’s all-conquering In My Feelings now has a music video, complete with Shiggy and Will Smith featuring in it.

The video starts out with a skit, with Drake calling out his girl Kiki (played by La La Anthony)

and asking her to meet him (she plays hard to get even as her mother (played by Phylicia Rashad) tells him off.

He does back down, but not before getting bae to promise she’ll show up. Next day, man goes about his business…

…while everybody’s bopping to In My Feelings.

So, well, he’s singing, gals be twerking and older folks just be nodding.

During all this, the originator of the #InMyFeelings Challenge, Shiggy is getting down and dirty on a moving bus.

The last straw is when he goes shirtless. That’s when Drake wakes up.

Yes, video director Karena Evans (who directed Drake’s ‘God’s Plan’ and ‘I’m Upset’) makes sure the virality of the dance challenge made popular by comedian Shiggy and the many celebrities (Ciara and Will Smith included) who followed were given their due in this video. So what if it is a seven-minute mini-film. It might well be the In My Feelings Dance Challenge to end them all.

Well, at least you get to see the personification of Kiki. You get to see Drake celebrating how viral the dance challenge got and major ups to him for including Shiggy in a big way in the video. And not to mention, the several fan videos Drizzy deemed fit to include in his video.

Man’s got a plan. And it’s working.