Are Amaal and Armaan India’s answer to The Chainsmokers?

The Prowl Anthem has all the makings of a hit

Amaal Mallik has delivered a piping hot new hit with the help of his brother Armaan Malik. Ready To Move (aka The Prowl Anthem) is here and the music video starring Tiger Shroff (Prowl, as we told you earlier, is his lifestyle brand) shows you exactly why the Mallik Bros and Tiger Shroff are a match made in heaven.

The video, directed by Adil Shaikh and choreographed by Paresh Shirodkar, has Tiger Shroff show off his signature flips and splits and spins and pull off some new moves as well. Adil’s put in some effects that just add to the whole energetic vibe. Is there a move Tiger cannot pull off?

Also this banger is not your traditional ‘Bollywood Dance Music’ track. Well, for the very apparent reason that it isn’t for a film but to promote a brand. But more importantly because it exudes that ‘have feet, will dance’ sound. And for all those looking for a new gym anthem to add to your playlist, look no further.

So what did we like about the track? Well, it’s new direction (though not entirely unfamiliar) that Amaal has taken and it works beautifully here. Armaan’s voice (yes, Amaal, we totally agree) suits Tiger so well, it’s like you can’t tell them apart!

And why The Chainsmokers comparison and not Major Lazer (who actually work predominantly on moombahton tracks)? Quite simply, because Drew Taggart and Alex Pall have dabbled in far more genres than the trio. Like the Bros, they consistently put out hits and challenge their boundaries and what people expect with them. And that’s saying something.

Don’t believe us? Check out the video yourself! 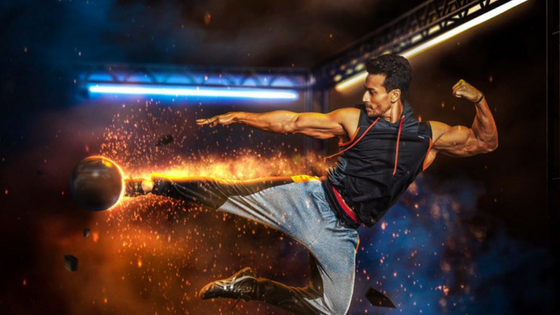 Tiger Shroff in Ready To Move