No more Bad Blood between Taylor and Katy? 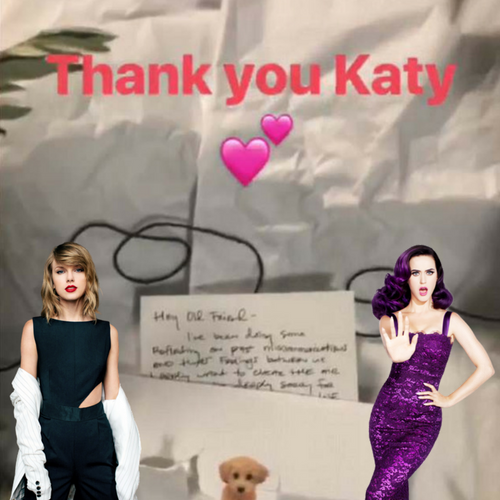 It would have been an analogy to “when pigs fly”, but now, it seems like this bad blood has well and truly been resolved between Katy Perry and Taylor Swift. Tay took to Instagram recently to post an olive branch (literally) and a note, seeking to end the long-running feud.

WAIT…WHAT?!
Ahead of Taylor Swift’s reputation tour, she posted a story on Instagram of a gift that he received from Katy Perry. It was an actual olive branch, that is the universal symbol of peace along with a hand-written note, that was attached with a cute puppy sticker of Katy’s beloved furry friend Nugget.

TAY’S REACTION
“I just got to my dressing room and found this actual olive branch. This means so much to me,” Swift said in the video. She wrote, “Thank you Katy” along with a heart emoji.

WHAT THE NOTE SAID
The note wasn’t very legible but we could see that it was written, “Hey old friend, I’ve been doing some reflecting on past miscommunications and hard feelings between us…” She also mentioned that she was “deeply sorry” and wanted to “clear the air.”

WHERE IT BEGAN
It all seemed to have started when Taylor’s hit single ‘Bad Blood’ came out from her 2014 album 1989. Swift had mentioned in an interview with Rolling Stone magazine that it was not about an ex-boyfriend but a fellow woman in the music industry: “She basically tried to sabotage an entire arena tour. She tried to hire a bunch of people out from under me.” Since then, the both of them have exchanged subtweets, lyrics, and other comments that indicated an ongoing feud and a full-blown social media war, among other things.

FAN REACTIONS
Fans went crazy, to say the least. Here are some of the best tweets –

@itsonlyzach: Sure, the Iran nuclear deal fell through, but Katy Perry and Taylor Swift have made up. In international diplomacy, you win some and you lose some

@sweehtner: KATY AND TAYLOR JUST SOLVED THEIR BAD BLOOD IT’S WHAT I DESERVE