REVIEW: ‘Aankh Marey’ is a remix done right, respecting its roots and rooting it in the present

The first single off SIMMBA is a remix by Tanishk Bagchi, sung by Neha Kakkar and Mika

You’re in fantastic touch when you can crack a joke on your own song before it even begins. That’s exactly what co-producer Karan Johar does when he makes an all-too-brief appearance in the over-the-top, garish, and surprisingly delightful Aankh Marey.

As much as we’ve grown tired of remixes, remakes, recreations and what-have-you, we won’t be shy from admitting that Tanishk Bagchi is getting increasingly good at what he does. Being a hit machine that is. By any means necessary.

The reason why we don’t (or rather can’t) hate on the remake is this, it’s actually better as a repackaged product.

This writer had little love for the original, despite growing up in the 90s. This song (and the film, Tere Mere Sapne) was a moderate hit with Arshad Warsi and Chandrachur Singh in the lead roles.

It features the voices of Kumar Sanu and Kavita Krishnamurthy, both at the height of their powers at the time.

What this remake does right is acknowledging its roots and at the same time, rooting it in the present.

Rohit Shetty ensures that his lead pair — Ranveer Singh and Sara Ali Khan — is dressed in all-black in sharp contrast to the overdose of colour and snazzes it up with some loud effects. He brings in his Golmaal/All The Best cast for a cameo (because why not?) followed by Arshad Warsi’s entry with the Kumar Sanu introduction.

Sara Ali Khan looks like a million bucks with the otherwise expressive Ranveer toning down his expressions several notches.

Sonically, not a fan of the chopped vocals, but largely, it works in context of the video.

We hear you loud and clear, Karan Johar, when you complain, “Oh god, one more remix?” right at the start of the video, but we can’t not help but understand why you went with it anyway. 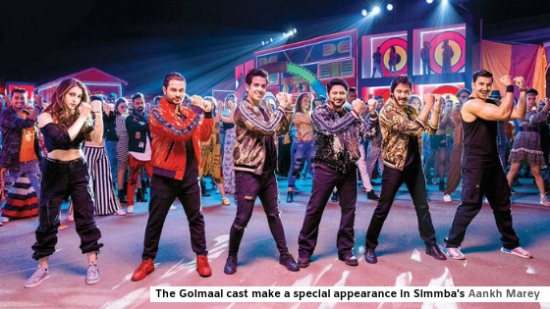