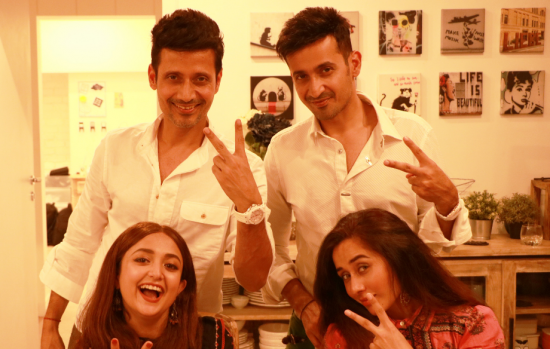 The new single, a gaana Original, features music by Meet Bros and vocals by the Bros, Monali Thakur and Piyush Mehroliyaa and lyrics by Shabbir Ahmed. The video has been directed by Shabina Khan.

About a girl prepping to meet her celebrity crush, it reminds you of Falguni Pathak songs (in a good way).

Clearly, Monali is having a lot of fun in her role as the female Cupid where she eventually brings Tejaswini face-to-face with Manjul.

Well, here’s the thing. As much as we loved the nostalgia-tinged trip to the 90s, we’re not entirely sold on Manjul’s acting. We fail to understand the fuss around the TikTok biggie, who’s best known for quirky videos and for looking photogenic.

Also, don’t know if it’s because the release of this single follows LoveYatri that we find Tejaswini to be quite similar-looking to Warina Hussain. If we didn’t know better, we’d have assumed the two to be twins.

As far as music production goes, the track is perfect for the season, is adequately festive and ticks the right boxes. One just wishes the storyline had been better fleshed out.