It’s been over three months since the release of Heartless, the first music video off Badshah’s O.N.E. album and we can say it has been well worth the wait. She Move It Like is the second single off the 17-track album to get a music video and it’s got all the makings of a winner, right out the starting post.

Featuring Warina Hussain (who debuted in Loveratri opposite Ayush Sharma), the Arvindr Khaira-helmed video sees the ‘Bad Boy’ driving a modified rickshaw in the middle of a desert, all Mad Max-like.

All the while, they’re also shimmying on a technicolor dot in the middle of nowhere before heading off to a fort (somewhere in Rajasthan, presumably?) and later on to what might well be a mela or a modern-day music festival.

Playing like something out of the fever dream of someone who’s been partying too hard (and still wants more), She Move It Like boasts of world-class production that powerfully complements some inventive wordplay that’s sure to become part of your day-to-day lingo, in case it hasn’t already.

What works for the video is conversation-starters — the logo on the back of the vehicle Badshah’s driving, Warina’s arresting screen presence, the locations, the editing, Badshah’s meme-worthy expressions and an all-round party-starting vibe that’s already in top gear.

This one will have you stuck in repeat mode. 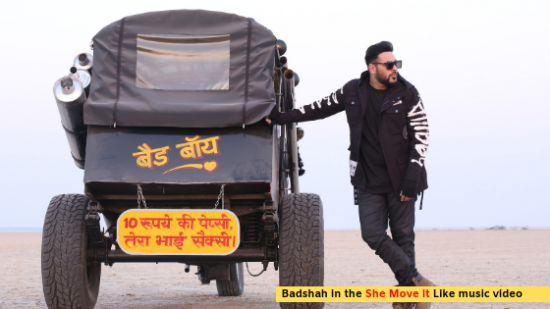