REVIEW: Simmba’s Tere Bin is a remake that needn’t have been one

“Life is like a box of chocolates. You never know what you’re gonna get”
– Forrest Gump

You might be consistently good at something, but occasionally, you do slip up. And that’s exactly what trips the Tanishk Bagchi track Tere Bin, the second song (and remake) from the Simmba soundtrack.

Right from Ranveer Singh’s erratic lip syncing in the video to the pointlessness of the classic hookline in this context, there’s the rather flat rendition by Rahat Fateh Ali Khan to consider.

Sara Ali Khan proves her mettle on the screen yet again, showing she has an arresting screen presence. Ranveer, on the other hand, is still rigid, as if being forced to sing and dance, which is quite unlike his real-life persona. 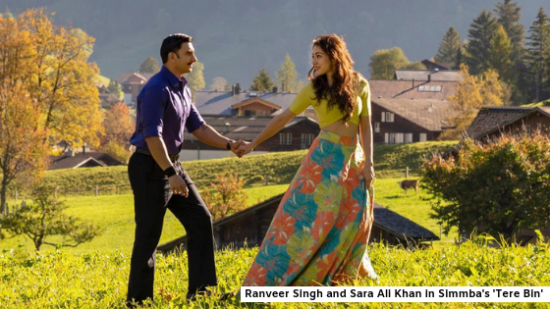 It’s a song that feels like it could have a life independent of the hookline (and you sense it), but resorts to it anyway, because it’s the well-worn formulaic path. And what accentuates this is Rashmi Virag’s lyrics and Asees Kaur’s portions. But here’s the thing, you wouldn’t have given this song a second glance without the glaring talking points in capital letters: ‘NUSRAT FATEH ALI KHAN’, ‘REMAKE’. And depending on the side of the divide you’re on, you’d be forced to have an opinion on it.

If there was ever a case to question the point of adapting a Nusrat Fateh Ali Khan classic just for the hookline and taking away the essence of what made it a classic in the first place, this is it.