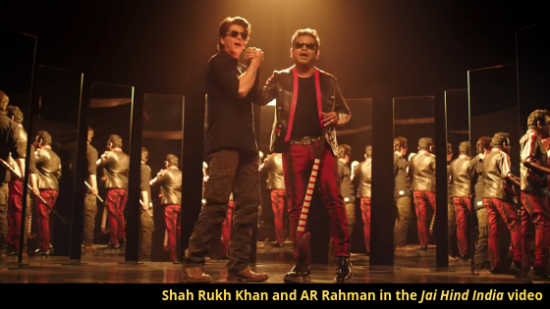 AR Rahman has teamed up with Shah Rukh Khan for Jai Hind India, ARR’s tribute to Indian hockey. It’s an anthem to motivate our team gunning for gold at the hockey World Cup.

When asked about the idea behind the song, a source told us, “This song intends to inspire the young generation to take the first step towards world domination in sports and leadership. It celebrates how united our nation is, adapting modernism, yet preserving our ancient values, embracing humanity fuelled by spiritual commonality.”

In fact, ARR and SRK even posted a Hook Step Challenge on YouTube with the former telling fans, “Get swanky, wear a smile, turn on your camera, face the light & post your entry on my Facebook. The best ones join us at the #HWCOpeningCeremony on 27th Nov!”