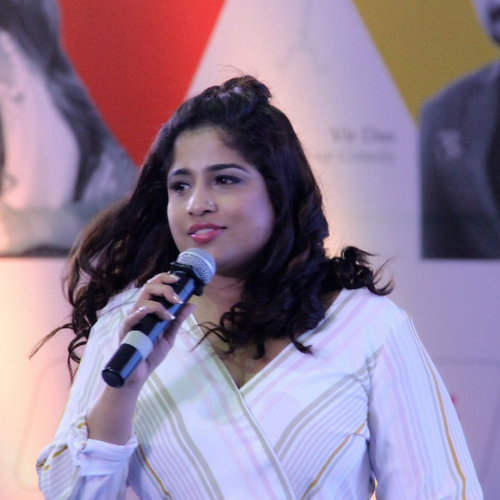 The popular radio jockey was in our suburb for the Santacruz Summer Fest.

Arguably India’s most loved RJ (definitely the city’s if you’re ever commuting in traffic) My Malishka, had an interactive masterclass at the Santacruz Summer Fest at Avenue 54 yesterday evening.

The chatty RJ kept the crowd entertained with her playful banter and doled out helpful tips for those aspiring to try their luck out on radio. Here’s what we learnt in her one-hour session

DOSES OF GYAN
– “Whatever it is that you believe you are today, that you can’t do it, or that it’s not possible for you, it is not true. I am the living example of that. All you have to do is make up your mind.”
– “A common man has so much power if only he knows how to harness it.”

MORE THAN AN RJ
With a short clip that discussed her entire team of professionals and their struggles, she explained that there is so much more to a radio station that just being a RJ. “All you need is to be passionate enough to do anything. Then you are unstoppable,” she said.

BAJAO FOR A CAUSE
One thing to know in case, you aren’t aware is that, using her famous voice and celebrity interviews, she has made it possible to get a flyover started, banned plastic and even gave the kids of Kamathipura a surprise by bringing over the King of Romance, Shah Rukh Khan for a meet-and-greet sesh. She also collected about Rs 1 crore for the children which was used to make hospitals, schools and much more financial aid.
She also got the audience to take part in a lucky draw. Two winners got the opportunity to visit the radio station with her. Three people tested their RJing skills and won prizes. Malishka’s mother was present in the audience, too.

FAST FACTS
– She’s been in the Radio career for about 13 years till now.
– She loves her “Boises” (her “all male” crew), very much.
– She wasn’t the most confident speaker in college.
– She started off with Vin 94.6 Radio station, which shut down in two years and left her jobless, testing out singing, doing voiceovers and hosting.
– Her first celebrity interview was with Akshay Kumar and they became fast friends soon after.