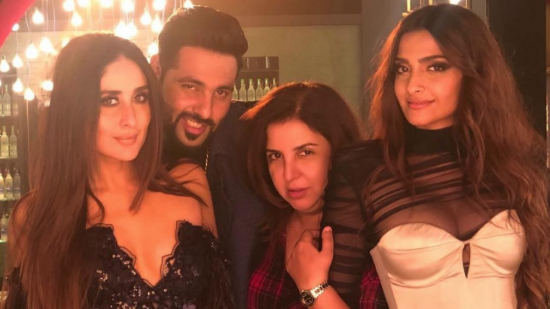 The song, featuring BADSHAH, is expected to drop on Wednesday

The highly-anticipated #notachickflick (but it’s such a chick flick) Veere Di Wedding’s lead single is expected to drop on Wednesday and our sources say that it is the promotional track Tareefan, featuring Badshah, which was shot earlier this month

The trailer for the Shashanka Ghosh-helmed film starring Kareena Kapoor Khan, Sonam Kapoor, Swara Bhasker and Shikha Talsania along with Sumeet Vyas, dropped last week and has already had 18 million views (and counting).

Badshah did mention earlier this month that the track was going to be part of the film and that he had co-written the lyrics for a Qaran Mehta composition.

The rapper will apparently rap as well as sing on a track for the first time. It will be a dance track with an “urban vibe”, he told a daily.

Reportedly, the video will see Kareena, Sonam, Shikha and Swara “parody roles reserved for men”. The song will be choreographed by Farah Khan and will feature Badshah in the video along with the actresses.

The video, which is expected to release on Wednesday, reunites Sonam with Badshah for the first time since Khoobsurat’s Abhi Toh Party Shuru Hui Hai.