‘This thing only goes to 11’: Celine Dion to Deadpool 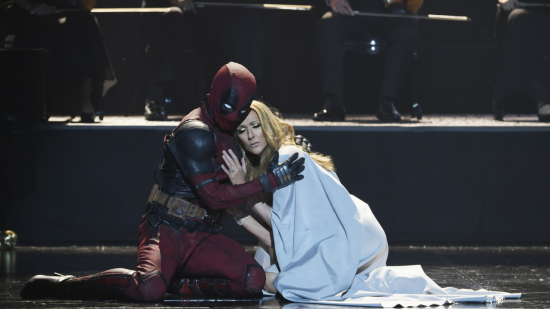 It’s a collaboration nobody saw coming. The chanteuse doing her thing on stage and the rascally devil-may-care anti-hero running pirouettes and tumbles around her (in high heels, no less!). If it sounds scripted, it probably actually is, but how utterly enjoyable!
‘Ashes’ is Celine Dion’s wow-worthy return to public consciousness. And it’s as if she had never left. Most of the people in my generation remember her for that one track we all know the words to (‘My Heart Will Go On’, in case… you know). The next generation has a new single to sing over and over and over again, till we’re fed up of it.
The fact that she does it with the fiendishly handsome and devastatingly debonair Deadpool in the follow-up to his first film, sounds like a dream. We weren’t ready for this. I don’t think Ryan Reynolds (aka ’Pool) was, either.

In fact, THAT ending! In the Merc-With-A-Mouth’s own words, “That was amazing, that was the most beautiful performance I’ve ever seen in my life!” adding, “but it’s not quite right. We need to do it again. Well, it’s too good. This is Deadpool 2, not Titanic,” he insists. “You’re at like an 11, we need to get you down to a five, five and a half tops. Just phone it in.”
And of course, Celine being Celine, replies to him, “Listen, this thing only goes to 11. So beat it, Spider-Man.” OUCH! She burned him with the most classic of burns. That spandex isn’t gonna be enough!