Which Indian singers are in YouTube’s ‘million likes’ club?

We have our favourite singers who we support to the ends of the earth (or YouTube, in this case) and needless to say, that list changes from listener to listener.

Everyone will have their names ready and we decided to run through the songs of the biggest names in the business to see how well-liked they were on YouTube.

So, we went calculating in the million-likes-plus range. And while we’ve excluded a few Punjabi artists (who have crossed a million likes, BTW) and where songs features more than two artists, the idea was to include those who had a foothold in both Bollywood and independent pop (or non-film singles). 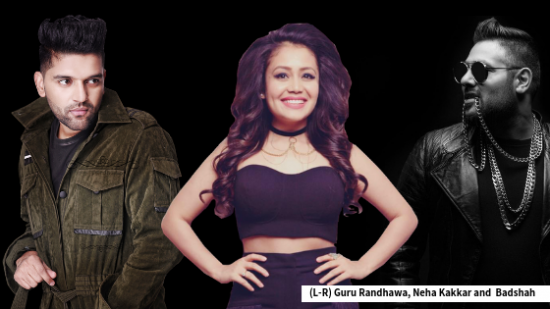 If you’re wondering who the most-liked singer on YouTube is, look no further than Guru Randhawa. With a cumulative score of 9.4 million likes, he is the clear leader of the pack.

Close on his heels is Neha Kakkar at a total of 8.3 million likes. Both Neha and Guru have 5 songs with more than a million in likes each (it needs to be said here that if one adds the title song of Badri Ki Dulhania to Neha’s list — the song features four singers and one backing vocalist — her total equals Guru’s.

While Guru’s independent singles dominate, his remake of High Rated Gabru for Bollywood film Nawabzaade also features on our list. Neha, on the other hand, has a reprise version of a Bollywood song as her most-liked song, both the official Dilbar video and the lyric video, Kala Chashma (three Bollywood songs) and an independent single to her name.

Badshah follows with a total of 5.3 million likes over four songs. Heartless (from his album O.N.E. is his most liked video. He has Bollywood singles Kala Chashma and Tareefan as lead artist and finally Aastha Gill’s Buzz as a featuring artist.

Tony Kakkar makes it to #4 as a featuring singer on Mile Ho Tum (Reprise) and O Humsafar with at total of 4.4 million likes.

Neha Bhasin comes next, with 3.4 million likes, with Swag Se Swagat and Heeriye contributing to her likes.

Vishal Dadlani (Swag Se Swagat), Yo Yo Honey Singh (Dil Chori and Dheere Dheere Se) and Darshan Raval (Tera Zikr and Kamariya) all tie at # with a total of 2.4 million likes each.

Meet Bros’ Heeriye gets them on the list with a million likes.

Here’s the break-up per artist..